Oyasama once said to an early follower:

“Here are seeds which will multiply ten thousandfold.”

Preparations for brewing Japanese sake take place in the middle of winter, when one of the crucial ingredients called koji rice is carefully crafted using koji mold (Aspergillus oryzae). Yes, this all-important initial stage is carried out during the severe cold of winter. This is apparently because higher temperatures would allow contamination by unwanted bacteria. Preventing it is critical to producing good-quality koji rice, which in turn is essential to proper fermentation that will result in delicious sake. 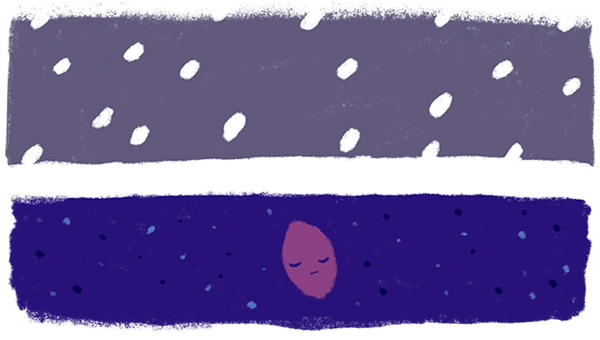 When we go through a difficult or stressful time in our lives, we can think of it as an opportunity to cultivate true sincerity. We might liken it to severe freezing conditions that are conducive to preparing excellent koji rice. Great adversities we face can help prevent us from being distracted by what might hinder the development of genuine sincerity, a prerequisite for pure adoration of Oyasama.

As sincerity grows, our natural ability to discern what is true and what is not can begin to kick in. We may find ourselves marveling at what is genuine and authentic.

Regardless of what else is present, true sincerity will shine forth in such a way as to be apparent to others. It will find spontaneous expression in words and actions that naturally strike a chord in the deepest and most beautiful parts of people’s hearts. It helps dissolve hatred and malice and awaken natural innocence and purity in people. The more society is driven by greed, the greater the impact of an encounter with genuine sincerity will be.

One person’s true sincerity will not only bring happiness to that person but is conducive to the happiness of others who come into contact with the person as well as of people who hear about it. Those beset by worries and anxieties may suddenly find themselves freed from their problems.

In the same way that electricity from a power station can travel through wires to large numbers of homes and businesses, one person’s genuine sincerity can be imparted through a network of minds and reach many others. The purer a person’s faith is, the more widely it can reach out. From one person to another, genuine faith can spread in wider and wider circles.

The number of us who are aware of Oyasama’s teachings is still small, yet we can have a profound and far-reaching impact on people’s minds. We can play a crucial role in helping more and more people transform their minds until, eventually, the world will be one of brightness and happiness—in the same way that a handful of koji mold gradually works its way through the rice until the cask is filled with sake that has a mellow, rich taste.

« All Days Are Lucky Days Always with You »